The difference between mechanical mods and regulated mods? 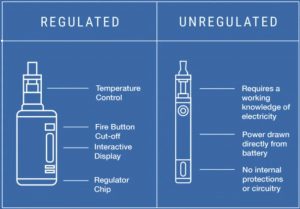 The term unregulated refers to how the mods works. This means the “regulation” of electric current that is drawn from the battery or batteries.

A mech-mod is a vapor device that heats your atomizer coil with current drawn directly from your batteries without any “regulation” imposed by any type of circuitry. No set wattage or limits. No safety protections. The coils that you make probably will not last as long in comparison to using them on a regulated mod. The risk of burning e-juice and frying coils with a mechanical mod, are the least of your concerns.

There are other risks of using unregulated mods that are far more serious. For example, with an unregulated mod there is no ability to read your atomizer resistance. If your atomizer resistance is such that it will draw enormous, unsafe current from your battery. It can possibly vaporize the metal coil. That’s not good. You need to look at the ohms before placing a tank on a mech-mod! The ohms should register between 1.0 -1.15 ohms, nothing more and nothing less!

Unregulated mods battery life don’t last nearly as long as even a start up kit and are often less used by vapors.

No delicate firmware or software

No circuitry to break down

No menu system to navigate

No restriction of power output to your atomizer

A regulated mod is a vaping device that has electric current from the battery controlled by a processor or chip. The chip, also sometimes called a board, typically offers an array of user options.

To sum it up. A regulated mod is a vape device that uses technology to customize your vaping experience. Such as bypassing the system and setting your own wattage. Having up to 5 different memory mods for your required wattage and of course temperature control.

Temperature control is a setting that identifies the metal properties used in the coil. It picks up the correct allocated temperature to heat the coil. Most regulated mods have a 10-second cut-off. The cut-off feature will end the current after 10 seconds. All regulated dual battery mods will most likely have a screen and a positive (+) & a negative(-) button with a power button.

The + & – is used to set your own wattage or degrees Celsius. Regulated mods are the most commonly used device, by vapers. Their battery life lasts far more then an unregulated mod. Each mod has a built in switch that regulates the flow of charge from its batteries. This is why regulated mods generally cost more then unregulated.

All start up kits are regulated too.

Many of the mod exploding  stories that the media portrays, are really battery thermal runaways. Sometimes, this involves a vaper who is not careful enough with their batteries. More often it is the case of a battery in a pocket or purse coming in contact with other metals like coins and keys. If both ends of a battery come in contact with metal it will discharge power as long as those contacts remain in place.

I hope this helps clarify issue revolving around mechanical mods vs regulated mods.

PS. Never store loose batteries in a pocket or purse. Keep them in a battery case.

Essentially it’s quite simple to understand and is a system where you mod has a soft squishy bottle installed inside the actual vape, where an area of the mod is exposed to allow Squonking.

END_OF_DOCUMENT_TOKEN_TO_BE_REPLACED

Today we will be covering different types of rebuildable atomizers and discover how far beneficial they can be; o...

END_OF_DOCUMENT_TOKEN_TO_BE_REPLACED

What is a Dry Herb Vaporizer? And why do we want want one? A dry herb vaporizer, weed vaporizer, herbal vape pen or portable dry herb ...

END_OF_DOCUMENT_TOKEN_TO_BE_REPLACED

What is a Vaporizer? A vaporizer is a device used to gently and immediately heat aromatherapy blends in order to create vapor. The vap...